Josh Ritter’s new song “The Gospel of Mary,” featuring The Milk Carton Kids, debuts today; listen/share it here: https://orcd.co/thegospelofmary. The track was recorded in Los Angeles during the summer of 2019.

“I wrote ‘The Gospel of Mary’ last summer, but returned to it, added to it, amended it, and basically worried over it like an injury. Like many, I have been horrified by the Administration’s treatment of our fellow human beings, shocked by the lack of empathy, and furious and bewildered by the depths to which we seem to have sunk. This wasn’t a song that I wanted to wait for a record to release. If it works as a song, it’s because the story is true,” says Ritter.

Additionally, Ritter continues to take his lauded live show on the road next year with the A Book of Gold Thrown Open tour. The shows will feature many facets of Ritter’s musicianship—ranging from stripped-back moments with just his voice and an acoustic guitar to the accompaniment of special guests. The select run of shows begins in Saratoga Springs on March 12 and includes shows at New York’s Murmrr Theatre, Los Angeles’ First United Church, San Francisco’s Herbst Theatre, D.C.’s Sixth & I Synagogue, Chicago’s First Unitarian Church and more. Tickets go on sale Friday, December 13 at joshritter.com and will also be available as part of Spotify’s FansFirst. See below for complete tour dates.

Of the forthcoming tour, Ritter notes, “I was thinking back to some of my favorite concerts over the years, and I realized how many took place in spaces that were special in their own right. Cathedrals, synagogues, strange and storied theaters, each bring a special kind of glow to the performance. I was also feeling the urge to play some of my quieter, more narrative songs that I may not always get the chance to perform during larger rock shows. So I decided to put together a tour that would allow me to play these songs, and some new ones that I’ve been writing, in some of these beautiful spaces.”

Most recently, Ritter’s “Tiny Desk” concert including special guests Jason Isbell and Amanda Shires debuted on NPR Music; watch/share it here: https://n.pr/2mk4dUu. The intimate performance included renditions of Ritter’s “All Some Kind of Dream” and “Torch Committee” as well as “The Gospel of Mary.”

“All Some Kind of Dream” and “Torch Committee” appear on Ritter’s latest album,
Fever Breaks, which was produced by Isbell and features Shires along with Isbell’s band, the 400 Unit. Released to widespread acclaim, the album debuted at #4 on Billboard’s Americana/ Folk Albums Chart, #5 on Independent Albums Chart, #14 on Top Current Albums Chart and appeared on the Billboard 200. Additionally, Rolling Stone praises, “It’s classic Ritter on Muscle Shoals-bred steroids,” while the Associated Press heralds, “There have been plenty of highlights in Ritter’s nearly 20-year recording career but it’s the intensity of the music and imagery that makes Fever Breaks an especially engaging outing.”

Over the course of his career Ritter has released ten full-length albums including 2017’s
Gathering, which debuted at #4 on Billboard’s Americana/Folk Albums chart and received widespread critical praise. NPR Music proclaimed, “Josh Ritter remains at the top of his game two decades into a highlight-strewn career. He’d be forgiven for loosening his grip, but his hand has never felt surer,” while the HuffPost furthered, “Gathering is beautiful and precise, and most of the beauty, to be certain, arises from a prolonged, often intimate contemplation of Ritter’s enormous skill set as an honest bard.” In 2015 Ritter began a close collaboration with Bob Weir and went on to write or co-write many of the 12 songs on Weir’s acclaimed 2016 solo album, Blue Mountain. Pitchfork called the album “quietly adventurous, wise, and a welcome late-career turn,” while Entertainment Weekly described it as “a moving group of tunes worthy of any campfire.”

In addition to his work as a musician, Ritter made his debut as a published author in 2011 with his New York Times best-selling novel Bright’s Passage (Dial Press/Random House). Stephen King wrote in The New York Times Book Review that Bright’s Passage “shines with a compressed lyricism that recalls Ray Bradbury in his prime…This is the work of a gifted novelist.” 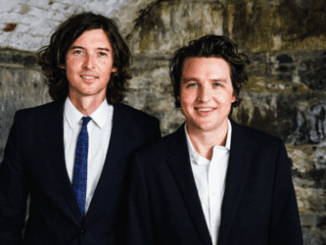 THE MILK CARTON KIDS’ “THE ONLY ONES” OUT OCTOBER 18