Photos and story courtesy of The Jerry Jonestown Massacre.

Walking into Kaaboo on Day 2 was just as exciting as Day 1. The fact that the weather was absolutely perfect was just icing on the cake. It was overcast and cool enough for a sweater, but not rainy. Perfect!
We hit the ground running checking out the Los Lonely Boys set on the Pegasus stage. This three piece out of San Angelo have been playing together for over 20 years…and it shows. They are tight, badass musicians that are super fun to watch. Playing all the classics, Blame it on Love all the way through Heaven, they had the crowd rocking the entire time. I had completely forgotten how great these three brothers are and I can’t thank Kaaboo enough for reminding me!

Getting to the Maverick stage just in time to see X, a classic punk quartet out of Los Angeles, was a total highlight for me. I remember how much my brother, 10 years my senior, loved them when I was a kid in the 70’s and early 80’s. They are still as hardcore as I remember, and the crowd was into it, slamming around, singing along to The World is a Mess; It’s in My Kiss, True Love, and Devil Doll, among others on their set list. They look good and sound good and are still out there having fun, which is really the most important part of that equation, right?

From X we raced back over to the Pegasus Stage in order to catch at least part of the set from Garbage. They only had enough time to do seven songs but made sure to get in all the ones everybody knows and loves, with fun little stories from the road by Shirley Manson sprinkled in between.

Next up was Flo Rida on that same stage. What an interesting set. MC’s always have the best banter with the crowd. Flo’s songs are all totally catchy, dancy little ditties and the crowd was totally obliging, shaking their money-makers and spitting out lyrics along with him. At one point he was throwing roses into the crowd and I thought *maybe* we might see a fight break out amongst the girls that wanted to catch one of them. And, of course, during Low, he had about 30 girls from the crowd up there dancing on stage. I bet that was the best part of their day because he singled them each out for a minute to dance with him.

Next up, you ask?! It was the Violent Femmes closing out the Maverick Stage for the evening! Probably the largest crowd I saw at that stage all weekend long and literally, everyone was singing the entire set. It was one gigantic sing along to Blister in the Sun, Gone Daddy Gone, American Music all the way through to their closing song of the encore – Add it Up! My favorite part was that they were making music with all sorts of unusual instruments such as a conch shell and a kettle grill. Also, they had a big daddy contrabass saxophone that doubled up the bass lines of many songs. The thing is 6’4″ tall and sounds AMAZING! If I remember correctly, there are only 12 of them in the world and the Femmes are touring with one of them. Totally wicked!

We headed inside to the Main Stage after the Femmes to catch the last part of the Lynyrd Skynyrd set and were lucky enough to see them play Simple Man, Sweet Home Alabama, and Free Bird. What an epic thing to see! The crowd was easily five thousand people, all loving every second of the set. We were able to watch everything happening from a birds-eye view on one of the upper decks and it was just as cool as you would expect it to be. I’m still a little bit in awe that I got to see them do Free Bird, I’m not gonna lie.
Closing out day two for us was Kid Rock on the main stage. I’m gonna tell y’all this right now… I was a giddy mess the entire set! I’ve seen many shows by many bands, but the dude is the Real McCoy and an excellent showman! I mean, his show is tight! He knows what he’s doing and how to get the crowd as into it as he is. The energy was electrifying and I don’t know that I’ve ever had more fun during a two hour set as I did during those two hours. I was Kid Rockin’ Up and Down the Block the *entire* time. I may have surprised my festival partner in crime with how excited I was, but seriously, it was hit after hit! Devil Without a Cause, American Badass, All Summer Long, Never Met a Motherfucker Quite Like Me, and my all-time favorite Cowboy, just to name a few off the top of my head. I wish I had the entire setlist to give you, but I was too busy busting out sick lyrics to mad beats to keep track of it all. I was just experiencing it. And what a fantastic experience it was!

Up next… We close out the festival with Day 3 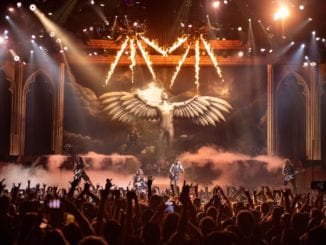 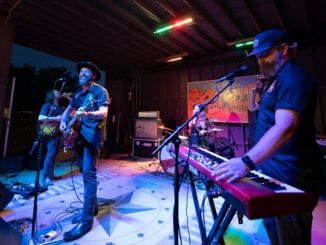